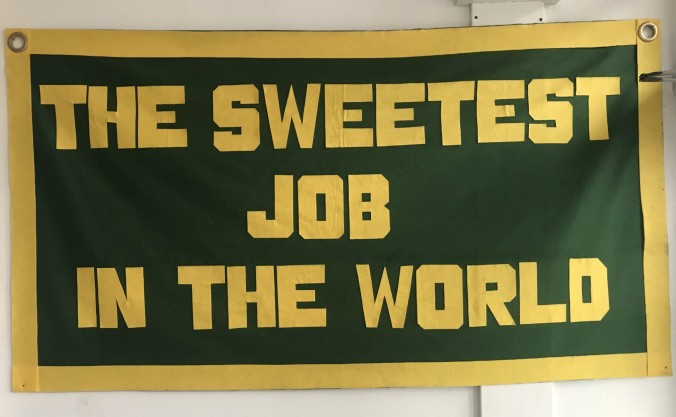 Studio Something is an agency with a difference.

I’d like to think my own agency, 1576 Advertising Limited, had a similar sure-footedness in its early days but I fear that would be bigging us up too much.  The landscape is different now and their advocacy of pure creativity is a harder course to steer in this rocky world of creative algorithms and Big Data than it was in 1994 when your TV screen still contained delights between programmes.

Creativity lies squarely at Studio Something’s core (square core? – Ed) which, obviously, appeals to me and they’re not afraid to break the rules.

As little babies they surprised the orthodoxy in Scotland by winning the Tennents Lager advertising account and running a multi-execution (online and cinema) animated campaign; a kind of soap opera about the life of Wellpark (site of the Tennents brewery).  Part slice of Scottish Life, part League of Gentlemen with dogs, it was a bold experiment that reaped great rewards.

That was the start.  Since then they’ve continued to surprise with interesting work for See Me and Innes and Gunn, amongst others.

And this post caught my eye on Medium this morning.

It’s essentially a job ad.  An ad for an internship, a creative internship.  But they’ve pulled a great stunt with it.  It’s not unpaid, it’s not minimum wage.  It’s (for one week only) paying the wage of the average Creative Director in the UK –  £45k (or (£865.38) to be precise.

But what makes this unashamed stunt much more interesting is the back story.

I don’t know if it’s written by Ian or Jordan, but it doesn’t matter.  It tells the tale of their damascene moment when Gerry Farrell offered them their own first PAID internship at The Leith Agency (or placement which sounds far more bearable) in the face of their impending personal bankruptcy.

It’s a minor chin wobbler but it also beautifully illustrates their culture.

Indeed (to brutally capitalise on their creativity for, frankly, my own gain) it’s a perfect illustration of EMPLOYER BRANDING, – like we’re doing at Inside Out, but with a boldness and joi de vivre that few could match.

You get a strong sense of values, culture and vision without using any of these words.  And most of all, if I was a 22 year old creative starting out on this rocky journey I’d want to work there.