The only criterion is that you were staff, supplier or client.  But friends will be welcome too.

Back in the day I effectively “commissioned” these films for use as viral mailers for our ad agency 1576.  My partners David and Adrian answered the brief to come up with something distinctive and daring and I felt that it would be hypocritical of me to knock them back.  After all I was often critical of our clients who weren’t ‘brave’ enough to buy challenging work.

So we went for it.  The ‘target audience’ was marketing directors who wanted work that would be noticed.  The first in the series was entitled ‘Bonk’.

I remember showing them with glee to my dad pointing out how challenging we were.  The look on his face said’ Mark you are a fucking idiot’ what he said was.  ‘Hmmm, not sure if thse will do you an awful lot of good really.’

And so to the second spot…’Exit’

We shot them in our client’s premises one Sunday at Granite House in Glasgow.  Direct Holidays it was.  funnily enough we lost the business not so long after.  The third in the series was ‘Toss’.  My personal favourite.

To add longevity to the campaign we even made a seasonal spot.

But did it work you ask?

Put it this way.  My dad called it right.

We had several calls to remove names from databases.  Our competitot=rs captured them and allegedly sent them to clients before pitches asking if they really wanted to work with an agency that made self promotion trailers like this.

BUT.  We retained our integrity.  AND we certainly stood out.

Judge for yourselves.  I’d be interested to know, ten years later, what you REALLY thought at the time.

This is the presentation I’ve been making about great advertising. It’s only my personal opinion but I’ve chosen to share my views on what makes for 20 of the most interesting ads/campaigns and commercials that I could lay my hands on and these are they…

The Avis campaign is 40 years old now and was created by the peerless DDB. Surely no agency (and one man in particular, Bill Bernbach) has made a greater impact on the history of advertising.

This is a wonderful example of both a great strategic insight and a brilliant execution in the world of social marketing.

This is best ad I’ve seen this year. In a sector where you’d least expect to see creative genius it’s a revelation.

Is this the most talked about ad ever? It’s a great example of Picasso’s view that bad artist’s copy, good arists steal. Show me the truly great creative that has no love of music, film and art and I will buy you a Picasso.

I loathe this ad. It is vacuous and is a true case of style over substance…

My all time favourite political poster is this one, done by Yellow M in Edinburgh.

The Ology ad, part of the long running Maureen Lipman campaign for BT is just brilliant populist TV that demonstrates the wonder of the telephone call.

And this is it in English!!!

This is another great VW ad with an amazing tone of voice..

Scotland’s greatest ever commercial? I think so.

One I was involved with myself. For Gold Bier, God knows how I gotr away with it…

This ‘ad’ has swept the boards at this year’s award ceremonies and rightly so, and it wasn’t even done by an ad agency. 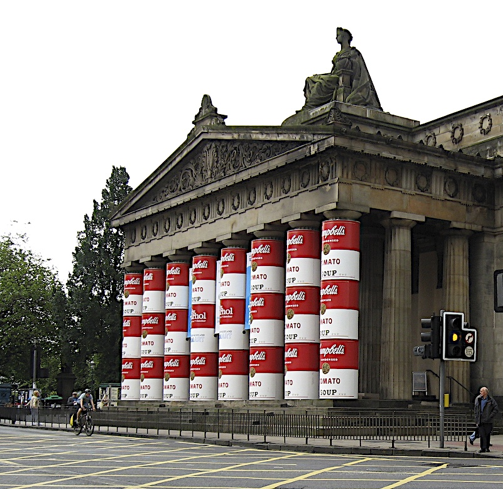 And see how brilliantly it has been spoofed here. That is the sign of greatness in advertising.

Alka Seltzer ran quite stunning demonstration advertising in the 1960’s, again with a fantastic tone of voice.

A great insight into defining your audience and creating empathy is seen in this wonderful Levy’s Rye bread campaign (yet again, I think, by DDB)

And this is magnificently planted in the mind of the target audience. Utter empathy. Utter brilliance.

And finally, the Blackcurrant Tango ad is another great tone of voice commercial.

And finally, finally. A momentary lapse of judgement. A 1576 house ad from the 90’s.

Although an unpleasant subject matter I was asked to allow my blog post on 1576 to be subbed for use in All Media Scotland. If you don’t read i, you should. It’s a good view on life in Scottish media and Mike Wilson is doing a good job there.

I think you’ll be able to read it by right clicking on the image and clicking on view, you can enlarge it to read it with the magnifying glass icon.  It’s easier than it sounds… Alternatively just go to the source, here. 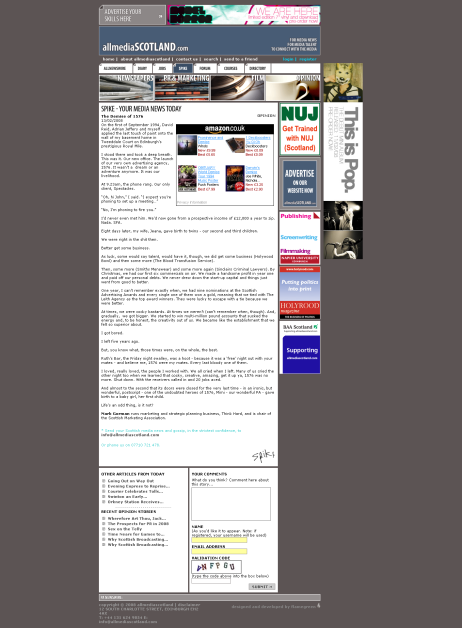 My wife and I watched a wonderful history of Stiff Records on the BBC last night. (Of course the BBC hated Stiff in its prime because it was a label of young anarchists).

I loved Stiff. And I’d forgotten how much. The summary of it all suggested that Stiff was a creative, out there, didn’t give a stuff label that believed in the artists and the work.

And, you know what?

Jeana said it before I did.

That was our philosophy.

It’s about the work.

OK, the medium may have changed. WHATEVER. But the need for great, insightful, creative ideas hasn’t changed one jot.

When 1576 set out we believed (like all good agencies) that the work was ALL. And I also believe we were right. Middle aged, as I am.

That’s why Mighty Small will, probably, be small but great.

That’s why people who want good work in this industry need to work with people who care, not just people who are doing a job.

On the 1st of September 1994 David Reid, Adrian Jeffery and myself put the last touch of paint onto the basement wall of our basement home in Tweeddale Court on Edinburgh’s prestigious Royal Mile (we always used Royal Mile in our address because it sounded better than High Street, which was the official postal address).  I stood there, resplendent in green and white Y Fronts (I always painted in my Y fronts because it was easier to clean your skin than your trousers) and took a deep breath.  This was it.  It wasnt a dream or an adventure anymore.  It was our livelihood.

I’d never even met him.  He was a complete twat as this, and future history (if there is such a thing) went on to prove.

Eight days later Jeana gave birth to our second and third child (the third conception and pregnancy was not some form of record – we had twins).

We were right in the shit then.

Better get some business.

As luck, some would say talent, would have it though we did get some business (Holywood Bowl) and some more (The Blood Transfusion Business) and some more (Smiths Menswear) and some more (Sinclairs Criminal Lawyers) so that by Christmas we had our first six commercials on air.  We made a handsome profit in year one and paid off our personal debts.  We never drew down the start up capital and things just went from good to better.

One year, I can’t remember exactly when, we had nine nominations at the Scottish Ad Awards and every single one of them won a Gold, meaning that we tied with The Lieth Agency as the top award winners.  They were lucky to escape with a tie because we were better.

But gradually we got bigger and bigger.  We won multi-million pound accounts that sucked the energy and, to be honest, the creativity out of us.  We became like the establishment that we felt so superior about.

But, you know what, those times were, on the whole, the best.  I made my bravest, and most foolish, clientesque decisions.

Picture the scene. David and Adrian having been briefed by me to write a series of commercioal virals selling 1576 present me with five scripts with a man dressed up as a six inch penis trying to perform office and day-to-day functions in the guise of a rubbish marketing director (most obscene of all was the penis going for a piss) and I said

“Fabulous, hilarious, it will really stand out!”

Not for good reasons.

Ruth’s Bar, the Friday night swalley, was a hoot – because it was a “free” night out with your mates – and believe me, 1576 were my mates.  Every last bloody one of them.

I loved, really loved, the people I worked with.  We all cried when I left.  Many of us cried last night too (I’m sure) when we learned that cocky, creative, amazing, get it up ya, 1576 was no more.

A very sad day and my heart goes out to David and all the team that were there at the end.

There was an error retrieving images from Instagram. An attempt will be remade in a few minutes.